This is an unpaid review of two Radian 80 Convertable Carseats

that I purchased for my personal use. When I review a product or service that was given to me for free, I will always let you know. I never keep freebies valued at over $40.

In 3 1/2 months, I will have three carseat aged children. Mostly that's exciting, but when it comes to the actual carseats, it has been a little bit stressful. I drive a small station wagon that I absolutely love and don't plan to replace, yet the two car Britax Roundabout Carseats

installed in it now almost completely fill the back seat. As my due date draws closer, I've become increasingly worried that we would have to replace the car - so when I saw that the Radian 80 Convertable Carseat

was on sale at Amazon a few weeks ago, I jumped on the chance to buy two. 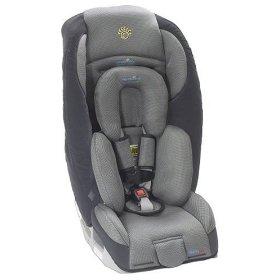 Why the Radian? I've been talking with friends, reading the car-seat tech newsgroups, and searching the Internet. The Radian 80 is the seat that everyone seems to recommend for three-across installations. Buying two brand new carseats when we are perfectly happy with what we have was painful, but not as painful as buying a new car would be. 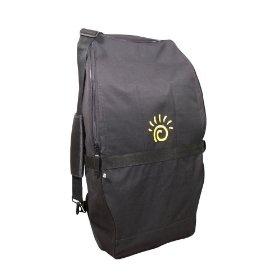 Traveling With The Radian 80
We have not yet flown with the Radian, but I wanted to cover this topic because experts often recommend this seat for travel. The seat folds, meaning that it is less likely to be damaged in transit than a traditional seat, and that it will fit more securely on a luggage cart. Sunshine Kids manufactures both a Radian Car Seat Travel Bag

that lets you carry the seat over your shoulder (or with two straps, on your back).

Weighing (literally) against those helpful features is the 22 lb heft of the seat. I would not want to carry this seat through the airport. If we were traveling with carseats, I would have my husband drop me, the kids, and the seats off at curbside checkin before parking the car.

Update: A reader pointed out that the Radian works with the Go Go Kidz Travelmate

, which would enable you to convert the car seat into a stroller and push it through the airport with your child sitting in it.

Conclusion
Overall, I like this carseat. The huge versatility in age range, and the fact that I will be able to keep the kids in a five-point harness as long as possible is a plus for me. Even if we weren't on the verge of having a third child, I probably would have chosen to upgrade to this carseat (instead of a booster) when E outgrows his Britax in a few months.