What to do in Kyoto With Kids 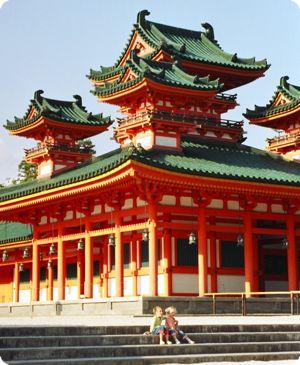 Ever since I reviewed the Little Travelers Japan DVD I've been a little bit obsessed with the idea of taking the kids to Japan. I loved the creative and fun looking activities Angelina (the mom behind the The Little Travelers Video Series

found, so I asked her if she'd share her top recommendations with me (and my readers). Lucky us... here they are.

I hope you'll agree that these all sound like tons of fun. Now if we can just work on the exchange rate...

Fushimi Inari Shrine Located on the Keihan Train Line, Exit Fushimi Inari station. This is the shrine with hundreds of red tori gates. The kids can wander through seemingly endless tunnels of winding gates. There are so many here that you can easily find very lightly populated areas and let the kids run through them for a bit.

Heian Shrine on the East side of Kyoto This is one of the most famous shrines in Kyoto and has the much photographed stepping stones through the koi pond. This is really fun for most kids I know. My three year old wanted to hold my hand but the 5 year old was very happy to go it alone. This does require some trust on the parents part and is a good exercise in embracing another culture. Japanese kids cross these kinds of stepping stones all the time.

Iwatayama Monkey Park in Arashiyama, where the monkeys roam free and the people can huddle into a cage at the top of the mountain. A must with children. It can be a bit intimidating and if you have children under two I would recommend a backpack or good sling to carry your child as the monkeys can be a bit aggressive.

Sansen-in Shrine located in Ohara. They have the most adorable little statues that my girls just loved. The nice thing about this shrine is that they give children little papers to put stamps on that are located throughout the shrine. It's a bit like a scavenger hunt looking for the stamps throughout the compound. It's gorgeous here. It's more towards the outskirts of town and rather countryside around. Near the shrine are some really great rice fields for wandering and tadpole hunting.

Ueno City's Ninja house and castle. Ueno is in Mie Prefecture, about a two hour train ride from Kyoto, but definitely doable for a daytrip if you're staying in Kyoto. The Ninja house has a guided tour that is in Japanese but you definitely don't need to understand the language to understand what's going on. On most weekdays you'll find lots of students here on school trips. Ditto for the castle, which is great fun for the kids to burn off some energy climbing stairs up to the top.

Lastly, make sure to stop into a kaiten sushi shop for the sushi that goes around the restaurant on conveyor belts. This is still the thing that the girls miss the most about Japan. "I wish we could go to round and round sushi for dinner" is something that I hear a lot- even though it's been over two years since our return.

If you want to see a great video of kids enjoying all of these places (and more), check out The Little Travelers - Japan DVD

or read Angelina's blog at The Little Travelers