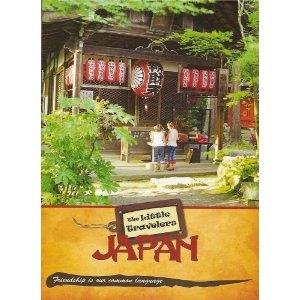 I often get requests to review DVDs and audio tapes focused on keeping kids entertained while they travel or teaching them something about the world. I usually politely decline, saying that I'm unlikely to give a fair review because we don't watch much TV or many DVDs.

When Angelina, the mom behind the The Little Travelers DVD Series

first contacted me I almost gave her the same response, but the first hand stories of her family visits to Japan, Bali, and the British Isles, looked like they could be interesting, so I asked her to send me a copy for review. I'm glad I did.

a video about the three months Angelina spent with her daughters in Japan. The video is told entirely in the voices of the two girls, and though the footage is beautiful and the story well constructed, it feels more like you are watching a high quality home video than a DVD targeted at kids. This is no overproduced "educational" children's special about Japan.

The video starts with the plane flight to Japan, and the home where the girls stayed. My kids were fascinated as the girls showed them where they slept, what the house was like, and details like how the washing machine worked (exactly the things my kids would focus on if they were in a Japanese house for the first time). Local customs, like removing shoes on tatami mats, were woven in with the other details about daily life, and that seemed like it would be helpful if we were actually planning a trip to Japan.

The video follows the girls as they travel around their town and around the country, to a local daycare, a friend's birthday party, a market and more. The girls also go to a Ninja house, and watch Ninja demonstrations, including some mild fighting. Though we generally try to avoid violent images in my home because the kids are so young, I felt that this was carefully filmed, didn't glorify the violence, and representative of an important part of Japan's history.

What I liked best about the video, though, was the beautiful way it captured the spirit of why a parent would travel with their children. I have been to Japan three times in my pre-child life, but through the girls eyes I saw it in a different way, and I wanted to go again with my own kids. That's what I try to do here at DeliciousBaby too... to show parents through my eyes what it can be like to travel with children, and to make travel with kids seem both possible and enjoyable.

This review is based upon a review copy that was provided by the manufacturer. I received no payment of any kind for this review. The product is valued at $20. Editorial reviews are separate and distinct from advertising on DeliciousBaby.com, and we never accept "advertorial" or "pay-for-positive reviews."