Ten Tips for Keeping a Toddler Busy on a Plane 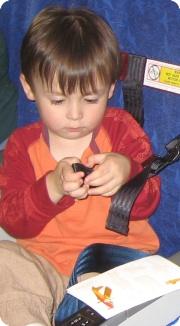 This time of year, every parent gets anxious about their travel plans and keeping their young kids occupied on long plane flights. Besides packing a few great travel toys you'll want to have some airplane activities that won't break or get lost. Here are our top ten airplane activities for toddlers and preschoolers that won't increase the size of your luggage!

You've already killed quite a bit of time without breaking into your secret stash of travel toys and books. Our next post will cover our favorite airplane toys for toddlers