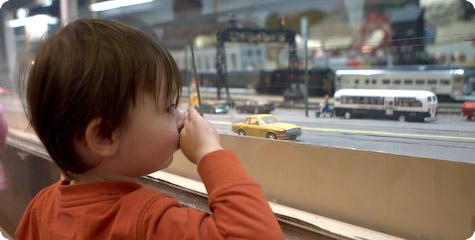 We woke up to on of San Diego's rare rainy days. . . not the day to hang out on the beach. It might also seem like a strange day to choose to go to a park, but Balboa Park has enough indoor activities that we knew we'd be able to make do.

Our first stop was the Puppet Theatre. The theatre features performances five days a week staffed by professionals and students. Performances are geared towards kids of all ages. Unfortunately, the performance running this week was a little... off. It was a one woman show with jokes geared towards older kids, not much action and creepy looking puppets. Our kids were sort of interested, but not delighted, and we wish we'd done something else with the time. The fact that it was a "holiday" show probably didn't help matters (we don't celebrate the one holiday featured in the show)

Next stop, the trolley. The trolley wouldn't exactly be considered a tourist attraction for most people, but as I've said before, it's impossible to overstate how much E loves to ride on busses, trains, and now trolleys. P and my parents took him for a ride while I walked D around in the sling to get her to sleep. When I met him at the train museum, he was all a-twitter with news of the trolley (and delighted to see a model trolley in the model railroad museum)

The San Diego Model Railroad Museum was an interesting experience. The museum is huge, and has four different model railroad tracks, all in different stages of completion. Clubs meet in the evening (and sometimes work during the day) to build the intricate scale models. Everything is at a height that makes it convenient for adults to work, which means that kids need to be lifted up or stand on the special platforms around the museum. There is a play area for toddlers with three Thomas Train setups and some blocks. E had fun (D slept through the whole thing) and it was a nice way to get out of the rain.

We grabbed lunch to go from In-n-Out Burger and took it back to my brother's house where he played happily with his cousins and took an afternoon nap.

The big bummer was that E came down with a stomach virus in the evening. I'll spare you the gory details from Wednesday and Thursday, but I think it's sufficient to say that it's just not fun being away from home with a sick kid (especially for the kid). Luckily he was in good spirits, but it definitely put a crimp in his style.