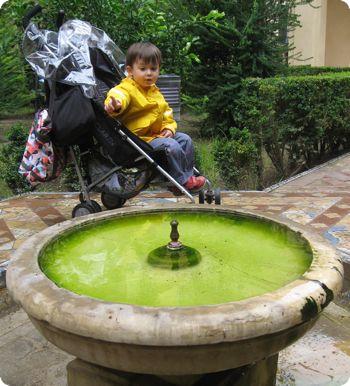 We were a little intimidated about braving Alcazar (the royal palace) with the kids. The site is huge and it’s the first really serious tourist attraction we’ve taken them to. It turns out that we shouldn’t have worried. The building had so much beautiful detail, that the kids were absolutely engrossed. The palace is built around beautiful outdoor patios (all with some sort of water feature), meaning that our visit transitioned between indoors and outdoors. We ended our visit with a run through the beautiful (and cool) gardens. E loved all the fountains, stopping to sing “twinkle, twinkle little star” each time he found a star shaped fountain.

We’ve never really encouraged the kids to feed ducks and birds before, but the birds inside the Alcazar seemed so far removed from the wild (and so well fed) that we decided to share some of the crackers we’d brought along for the kids. What a treat! Just as the kids started to tire of watching the ducks race for the crackers, ornamental fish, hidden until then by the murky water, began to jump and snap at the food. We’ll have a hard time breaking the kids of this habit when we return home, and the video we shot of the duck feeding has become E’s most requested video.

For lunch we stopped in a typical outdoor restaurant. Feeling especially picky, E rejected everything, even things he normally enjoys. By dinner we were feeling desperate for him to eat. In a move that I would have never believed a few weeks ago, we took E for his first Happy Meal thinking that he would wolf down chicken nuggets and ketchup. We were sadly mistaken, he ate some fries but nothing else, and we missed an opportunity to have a meal that the rest of us could have enjoyed. I’ve redoubled my resolve not to try the Mc Donalds route again and stick with local choices.