Some parents would balk at the idea of taking time out from their sun-and-sand filled Hawaiian vacation to take the kids to a museum. Most kids would too. Still, I think it's important to learn at least a little about each of the places we visit, in part because learning about other cultures is what fuels me, and in part because, for the kids, it helps make history, geography and geology concrete living studies instead of abstract facts to be memorized.

On my own childhood trips to Hawaii, the cultural piece always came in the form of a Polynesian Luau. Those were fun (and memorable) experiences, but it always felt like there was an element missing. Somehow those experiences were more about the glamor of a big show than about connecting with Hawaii. How did people live? What did they eat? What's unique about Hawaii (besides the year round balmy weather)? None of those questions were answered, and when I left, Hawaii felt more like a gigantic amusement park and less like a real-world destination with a complex history and culture (or any history at all, really). I wasn't old enough to care, or complain, but I think that lack of connection tainted my adult ideas about Hawaii as a destination. 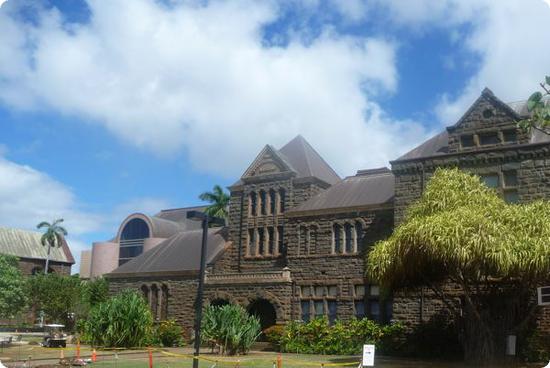 We started with the Bishop Museum's Hawaiian Hall. This historic building was built in 1888 to house the Royal Family's collection of Hawaiian artifacts, and it was completely renovated in 2009. Some renovations are all glamor and no depth, but not this one. The antique woodwork is all in-tact, and the collection is beautifully organized. What did the kids think though? Hmm.... I can't fool them, it still looks like a museum.

We raced through the collection, with brief stops to check out something cool - hey, look at those royal robes made of bird feathers. Wow, look how they fished. Neat baskets! But the one thing they really stopped to take in was this model building - complete with several models (computerized and physical) that showed how it would have been built, and where it would have been placed in a larger temple complex. I'm not sure my kids have ever really considered how a house gets built, and they just loved the idea that this one was built out of real world materials - not carefully cut and processed wood from Home Depot. 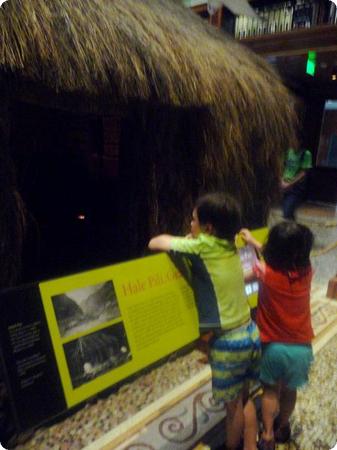 Model of typical Hawaiian construction at the Bishop Museum

A small, and nicely done, hands on area also held their interest for a while. (Yes, Everest is wearing his swimsuit to a museum. It's Hawaii after all!) They got to check out native Hawaiian wildlife, try their hand at using Hawaiian tools and play the musical instruments that they would see later at Hula dancing shows. 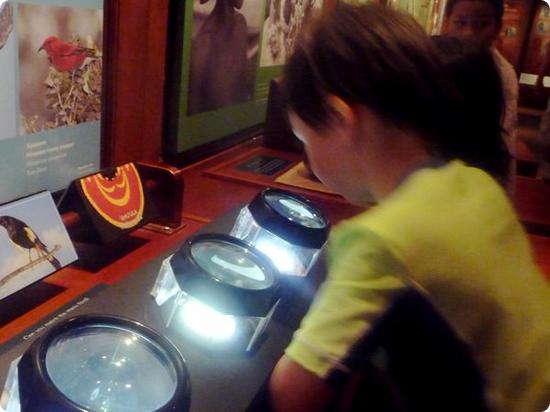 Hands on Area in the Bishop Museum's Hawaiian Hall

When poor Darya finally gave up and started begging to get back outside, I had no husband to tag-team with (he was off working on a last minute project). We couldn't tag team with one person taking the kids while the other viewed the collection. Aching to learn more, and a little disappointed, I headed outside where (lucky for me) there are huge lawns and even a running sprinkler or two.

The surprise, for me, came several days later when we took the kids to 'Ulalena a stunning musical about Hawaiian History. "OOOOOOH," breathed Everest as the feather standard bearers walked onto the stage, "the king is coming." Somehow, between the glazed over looks and the hustle to get back outside, he'd taken in the core of what the museum was about, and it provided an anchor that made the eye-candy filled show more meaningful and real.

I doubt the kids will ever thank me for taking them to cultural museums when we travel. I don't mind. Hearing them start to relate to the places we visit is reward enough.