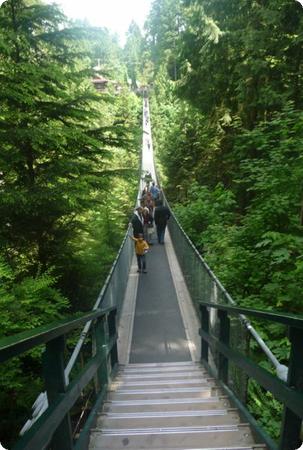 Do you dare to cross the Capilano Suspension Bridge?

I have a fear of heights, and I don't really trust pedestrian bridges. s it any surprise that a 450 bridge suspended 230 feet above the Capilano river isn't my idea of a party? Since I had kids, I've been pushing myself to do more things that I'm afraid of. There's no real danger for them or me here, and I don't want to pass my phobias on to them. Still, activities like this one require real commitment and lots of deep breaths.

I didn't know what to expect at the Capilano Suspension Bridge? Would it just be a bridge across the river? Would the kids be scared to cross? Or perhaps they'd get worried right in the middle? Would this activity be a good "fit" for young kids? We left 2yo Eilan back at the hotel for a nap and made this a big-kids only activity. I definitely didn't want a struggle with a squirmy toddler at midspan.

As we entered the park, there was a small historic area with docents dressed up in the clothing that would have been typical when the bridge was built in 1889. The kids stopped to do a little coloring and get some temporary tattoos. That gave all of us a chance to settle in a little before crossing the bridge. 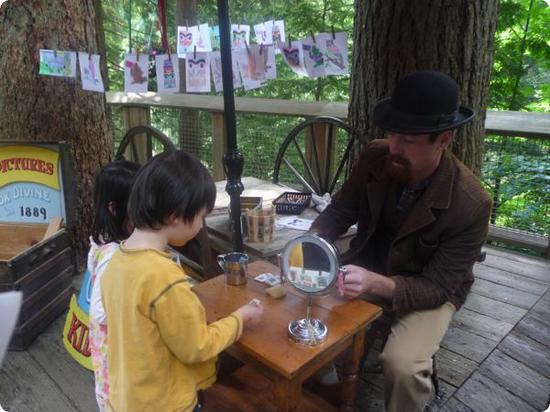 Everest gets a "tattoo" at the Capilano Suspension Bridge

Then it was time to head across the bridge. The kids were hesitant at first, but by the time we reached the end, Everest and Darya thought the rocking and swaying were fun. I did ok too... I'm always amazed at how much more willing I am to be brave for my kids than for myself. 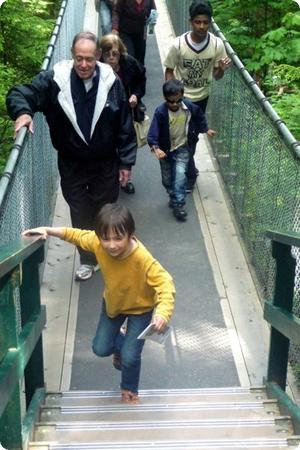 Here's the view from the midpoint. Note all those trees - Capilano Suspension bridge is set in a rainforest, making it a great place to escape the heat in mid-summer. The bridge itself was built by George Grant Mackay, a civil engineer who wanted an easy way to cross the river since hunting was better on the other side. It must have also been a fun project for him! Don't worry, the bridge has been rebuilt several times since it was first constructed in the late 1800's. 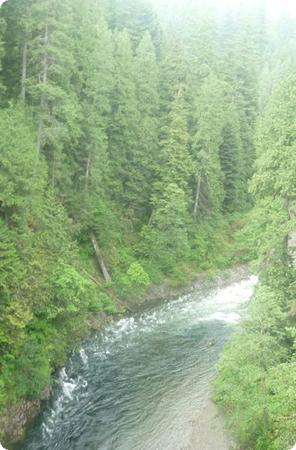 Midpont on the Capilano Suspension Bridge

Most of the attractions are on the far side of the bridge, and we had a much nicer time here than I would have guessed. The setting is absolutely beautiful, and while the attraction was way to paved, manicured and busy to be considered a "hike" we did have a lovely walk in the woods.

Far from the whining I usually hear when we try to take the kids out on a hike, they absolutely loved the treetops adventure (a network of bridges suspended from treetops and connected by a series of treehouses and lookouts. My kids claim that they're much too old for The Magic Treehouse Books

(they're not). Even so, the idea of pretending to be Jack and Annie landing in the treetops, just like in Afternoon on the Amazon

was irresistible, and as we traipsed through the treetops, Darya shouted to me "Mom, I can't believe Daddy is missing this. Poor Daddy." 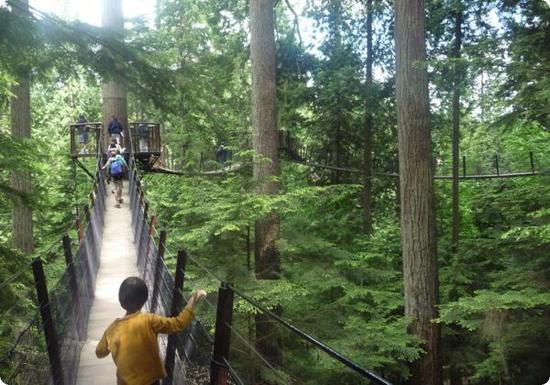 She's right, and with that one little sentence, my phobia about heights and bridges started to seem a little silly. I'm glad I didn't let a little discomfort make me miss out on this chance to explore something new with the kids.

Notes: Strollers are not permitted on the bridges, and you'll want to be careful about carrying a squirmy child across the bridge. Adult admission is a whopping $32.95CAD, but kids under age 6 are free.

We were invited guests of the Capilano Suspension Bridge on this trip and did not pay admission. Our experience once in the park was no different than any other patron. The hotel did not require that I express a particular point of view, and I always strive to present a fair and balanced review regardless of who is paying the bill.