This is a memory from last year's Family Trip to Whistler

Everest was done. Just through. He'd tried skiing for two days, and he hadn't quite gotten into a groove. To make things worse, his baby sister had surpassed him, speeding down the mountain on her first green run while he was still struggling with turns and snowplow stops. Everest is more cerebral than is sister, he needs time to think and reflect, and sports don't come easily to him.

With two days of skiing under his belt, I felt that Everest had given the sport a fair try. We'd loop back around later, but at this point, adding a third day would only create negativity. What he needed instead (or maybe it was what I needed) was the thing we rarely get, special time alone together. I'd already reserved a childcare slot for Eilan, and Darya would be in Ski lessons. We were good to go. 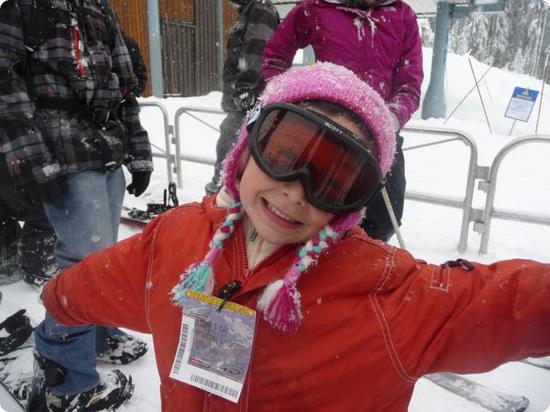 Everest is ready for an adventure

A trip on Whistler's Peak to Peak gondola seemed like the obvious activity choice. Built for the 2010 Olympics, the gondola spans the 4.4-kilometres between the Whistler and Blackcomb peaks and travels 436 metres above the valley floor. It's practically an amusement park ride, and you don't need skis to go up, just a lift pass and warm clothes. We would ride up Blackcomb mountain, enjoy some hot chocolate at the peak, cross over to Whistler mountain on the Peak 2 Peak, and take the Whistler express gondola down to Whistler village where we'd meet up with the rest of the family for lunch. The perfect mother-son-date, as long as you ignore the fact that I'm afraid of heights, and can't seem to trust gondolas, something I only seem to remember as I step onboard.

As we left the ground on our first gondola, I must have reminded Everest 12 times to sit back in his chair and hold on to the crossbar. His eyes opened wide as we left the ground. "Did Darya do this mom? With skis on?" We chattered on the way up about the snow, the cold air, and all sorts of 5-year old boy stuff, but Darya was still on his mind. Every few minutes there was another question, "Did she go this far mom? Did she really ski down?" His face looked concerned, puzzled, and maybe a little jealous all at once. Finally, as we reached the top of that first gondola ride, he announced, "I'm really surprised that Darya could ski down from way up here. Mom, I'm really proud of Darya." And amazingly, he was. 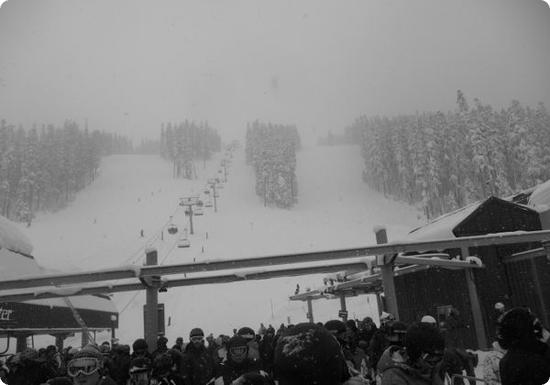 Even from the top of the first Gondola, it's a long snowy ride to the top of Blackcomb Mountain

But our journey wasn't done. As we stepped off that first gondola, the snow was coming down fast and furious. Lift closures on other parts of the mountain meant that more skiers and snowboarders than usual were queued up in front of us, spilling out of the gates that would contain a more typical traffic level. It was a riot of colors, and Everest was just mesmerized by all the people, their gear, the accents and languages, and of course the ever falling snow. I've never seen him so content to stand in a line.

We rode higher, this time in an open gondola. Had I been on my own, I probably would have turned around (note: if you're as squeamish about heights and open gondolas as I am, you can ride the Whistler Village Gondola up, take a round-trip ride on the Peak 2 Peak, and then take the Whistler Village Gondola back down to Whistler Village). I try to be mindful about not passing my phobias on to my kids though, so after a few deep breaths we continued up to the Blackcomb mountain peak. Everest was grinning and chattering away, even as the snow fell faster and heavier, while I did my best to keep smiling.

When we finally arrived, being so high up on Blackcomb Mountain felt like being on a different planet. The crowds thinned out, there was more of a "serious" skier vibe (with the occasional family thrown in). The day's heavy snow and wind made it difficult for Everest to walk. Everest was just fascinated, and it was a very concrete lesson about how altitude impacts weather. We worked our way into the lodge and cuddled up with some hot chocolate before making our way over to the Peak 2 Peak Gondola. 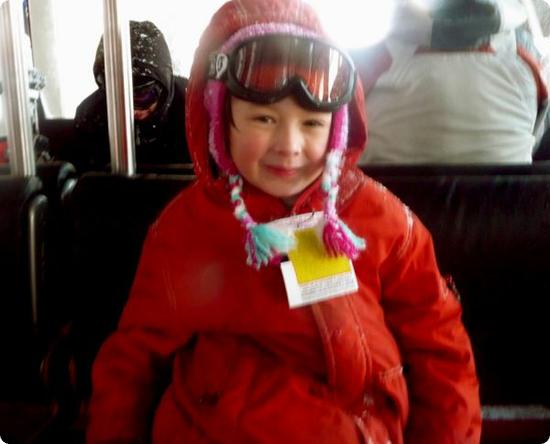 After all that climbing, the calm, smooth, fully-enclosed (and almost warm) ride between the peaks seemed almost uneventful. With no other distractions, few sounds, and a soothingly snowy view, Everest and I had a rare opportunity to settle in, unwind, and talk about our trip so far, what we hoped to do when we return home. It was just what I'd hoped for, and entirely different than I'd imagined, both stimulating and peaceful.

Landing in Whistler Village after a quick ride down on the Whistler Village Gondola felt like a an immigration. The chaos of skiers meeting friends outside bars, the smell of poutine, the sounds of apres-ski music, and the visual cacophony of all that colorful ski gear was almost difficult to process after our journey to the moon.