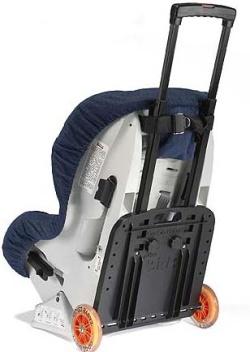 Last week's giveaway was a great success and I'm excited to have another great product for giveaway this week.

, and I'm delighted to give it away to one lucky reader.

The GoGo Kidz Travelmate, first featured in our article on Using Car Seat Carriers to get through the Airport and your Flights, attaches to your car seat and makes it into a rolling stroller. Your kid can sit in the seat as you go! This is a great way to get through the airport, especially if you don't need a stroller at your destination. You can gate-check your car seat or carry it on the plane and stow the Travelmate.

This Giveaway is now closed. To learn about new giveaways as they become available, please

Note that the Travelmate must be removed before the car seat is installed in a car.

If you'd like a chance to win a Travelmate, leave us a comment before Midnight PST on Wednesday April 23 and tell us your dream destination for a family vacation. If you win and wish to be contacted by email, please include your email address with your comment (your email isn't shared with anyone). Otherwise, you must check back here to see if you've won.

We'll choose a winner randomly and announce the results here on Thursday April 24. Many thanks to Go Go Babyz for generously sponsoring this giveaway.

If you have family or friends who you know will love this giveaway, just click the "share this" link at the bottom of this (or any) post to email it to a friend.

Rules: Please, only one comment per person per giveaway post. Duplicate comments and Anonymous comments will be discarded. Please make sure that the email address in your comment is valid (email addresses are never public). Winners must claim their prize within three business days after the date of notification of such prize. A Sweepstakes winner's failure to respond to the prize notification within the specified three business days will be considered such Sweepstakes winner's forfeiture of the prize and an alternate winner may be selected from the pool of eligible entries. If an entrant is found to be ineligible, an alternate winner may also be selected from the pool of eligible entries. To enter, you must be a U.S. resident, age 18 or older. Employees, partners and vendors of DeliciousBaby and their immediate family members are not eligible to enter. We will disqualify any entries that we believe are generated by scripts and other automated technology. When applicable, the winner may be required to execute and return within five business days an Affidavit of Eligibility and a Liability and Publicity Release to be eligible for the prize or an alternate winner will be selected. All prizes will be awarded. No substitutions including for cash are permitted, except that DeliciousBaby reserves the right to substitute a prize of equal or greater monetary value for any prize. Winners shall be responsible and liable for all federal, state and local taxes on the value of their prize.