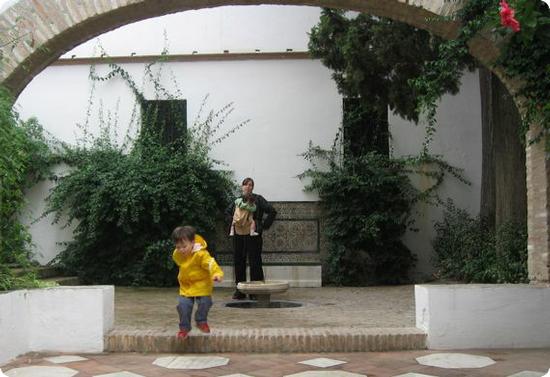 When we took the kids to Sevilla last fall, one of our top "sites to see" was the beautiful Alcazar The Alcazar was originally a Moorish fort, and served as a palace to Spain's royal family. It has been expanded several times, and with each expansion, you can see the different architectural styles of the time. Luckily, though, even during the times of Christian rule in Spain, the royal family chose to leave the original architecture in place, and the oldest part of the palace is one of the best examples of mudéjar architecture remaining today.

The kids didn't care about any of that though, what they loved was they way indoor and outdoor spaces were incorporated throughout the Alcazar with many of the courtyards using water to keep things cool. They were fascinated by the fish in some of the ponds, and the peacocks roaming in one of the courtyards. They were thrilled to see oranges growing on the trees in the garden, and entranced with the intricate designs that covered each wall. They explored the space in their own way, and if that included some joyous jumping from the steps, that was just fine with us.

Photo Friday: Please Share Your Photos Too: Share a favorite travel photo by adding your link below. First timers, here is more Information about Photo Friday