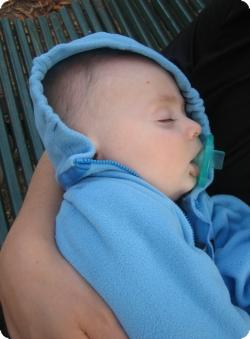 I received this question from Jenny, who lives in China with her 3 month old baby.

Hi! This website is great as my husband and I are expats living in China right now and just had a baby 3 months ago. We love travelling and hoped to keep travelling even with our new son, but our friends told us it was almost impossible. We are planning on returning home to Hawaii for a month in February and I'm really worried about the jet lag. Currently he is on a great schedule, sleeping 11 hours a night and I'm so scared to ruin it all! My question is if he wakes up in the middle of night to eat and I've fed him following his usual 4 hour schedule during the day, should I feed him again at night? Even though I know he's eaten enough during the day? Will that cause him to set himself on a new schedule to eat during the night? Thanks so much for the info and your great site!

Here is my response:

You should set your expectations now that your son will wake up hungry the first few nights (frankly, I wake up hungry the first few nights when we travel) It's ok to feed him if he's hungry. If you're worried that he's getting too used to the night waking, you can start to cut back gradually after a few nights. Every child is different, and I'm betting that you'll figure out what feels like the right pace for him.

Most likely he'll gradually adjust his sleeping and eating on his own (especially since he is such a good sleeper). Take him outside during the day a lot to help him reset his internal clock & try to keep his routine similar to the one you use at home so that he knows when it is nighttime. Expect that it will take several days for him to return back to his normal schedule and routine once you return home as well.

Hang in there. Sleep training isn't truly "done" for quite some time. Travel, teething, illness, rolling, crawling, and walking all cause temporary disruptions, so try not to get too hung up on this one disruption.

Have a great time in Hawaii!

Do you have a question about traveling with kids? Send me email: debbie at deliciousbaby dot com

Related Links:
Jet Lag with Babies, Toddlers, and Kids
Naptime and Bedtime on your Family Vacation