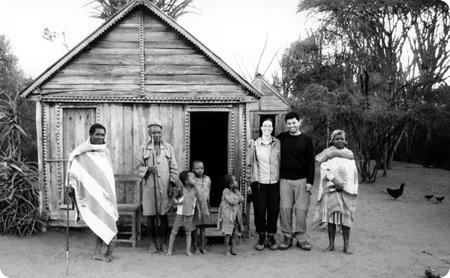 Today is Blog Action Day, and over 9000 bloggers around the world are uniting to post on a single subject: Poverty. I thought I would share a personal experience in the hope that it inspires you to help.

In 2001, long before E was born, my husband and I spent 2 weeks in Madagascar, an island-nation off the coast of Africa. It's a spectacular place, with unique flora and fauna (many varieties of baobab trees and lemurs) and diverse micro-climates. It also happens to be one of the poorest countries in the world. Like most tourists, we came to see the sights.

The trip turned out to be our first brush with real poverty, and it opened our eyes to the advantages we have simply because we were born in the United States. More than the images on TV or anything we'd read in a book, meeting families whose every-day life was a struggle gave me a new perspective on poverty.

Most Americans know little about Madagascar beyond the Dreamworks movie. The island, sometimes called the 7th continent, is incredibly diverse. Of the 12,000 plants native to Madagascar, 85% are found nowhere else in the world. Madagascar's rainforests and other micro-climates are still a largely untapped resource, and the environments harbor undiscovered plants and animals that scientists believe may hold the secrets to curing cancer and other diseases. Yet poverty, and the need to survive, drives locals to deforest the country at an alarming rate, using techniques like slash-and-burn agriculture to keep their families fed.

When we visited Madagascar, the per-capita GNP was $220. That's about 60 cents per day, per person. Can you imagine surviving on that much, let alone pulling yourself out of poverty? An average person doesn't even have that much. Most of the wealth is concentrated in the hands of the business class and politicians, and there are very few opportunities to break out of one's station in life. The bustling capitol city, Tana, is overwhelming in it's own way, but to really understand what it means to "live off the land" in a poor country, you need to go out to the villages.

We spent much of our trip camping in remote locations, but we journeyed to the south for a few days at an Berenty Private Nature Reserve, a pleasant lodge where tourists can easily hike through the spiny desert and watch the sifakas (a kind of lemur). It seemed strange to sleep in cabins with en-suite bathrooms and feast on elaborate dinners while the locals were making do with so little, but the reserve brings in much-needed tourist dollars, and provides an economic incentive to keep the forest safe from the real industry of the area -- sisal production.

On our drive in, we gained our first understanding what it means to be truly poor. As we passed the closest "village," a collection of roadside shacks not much bigger than a child's playhouse in the U.S., people rushed out to their "shops" to sell their goods: sculptures of chameleons, turtles, and of course lemurs carved out of the scarce local wood. A dollar or two for each provided much needed income for families struggling to survive in the parched desert. We made our best effort to spread our money around evenly, and walked away with several carvings we now treasure.

We wanted to understand more, so we took time out from our nature walks at the reserve to visit the nearby sisal factory. Sisal, a plant native to Mexico, grows well in Madagascar and is used to make many products, including this rug from Pottery Barn. It turned out that the equipment was broken, leaving the locals who normally worked in the factory unemployed. A trip to the market was particularly depressing, with few sellers (and fewer buyers). The only products were rice, beans, and dried corn. Unlike other areas we visited in Africa, rice and beans were sold by the cup... it seemed that few families could afford to buy more than a day's worth of food. Uncertain what to do, we bought a small amount of rice and beans and then left them in our hotel room for the cleaning crew.

On another day, we asked our guide to drive us through the sisal fields, and he suggested a sunset stop on a hillside overlooking the plantation. The lookout turned out to be the home to the groundskeeper and they were surprised and excited when we showed up. Compared to the homes we'd seen on the drive in, theirs was a palace, and of course they were among the few local families who wouldn't have been put out of a job by the factory closure. Still, it was evident that nobody was eating enough, and of course, the creature comforts that we take for granted, like running water, electricity, or manufactured goods were non-existent. We couldn't really communicate, but it was fun to show them pictures of Madagascar (and of snow back home in Seattle) on our digital camera and to play with the kids. Before we left, we snapped the picture that is the lead for this story.

It strikes me that I don't have a tidy way to wrap up this post. The poverty we saw was upsetting on multiple levels and we struggled throughout the trip to decide what our responsibility was and how to best help. If I have one clear takeaway, it's that it would be incredibly difficult for these people to change their circumstances on their own, and as people lucky enough to be born in vastly different circumstances, we have a responsibility to help.

Even if I didn't care on a moral level about about the suffering, at an intellectual level it upsets me to think that the kids growing up there could be the next Mozart or Einstein, but they wont have an opportunity to develop their talents and share them with the world at large. With poor nutrition, few options and minimal education, they'll never have the chance to contribute beyond their own villages. Who knows what potential future nobel laureate might be living in one of these shacks? But let's pretend for a minute that I care more about maintaining my own economic advantage than building a world where the best and brightest talents are applied to solving our problems. Those untapped rainforests continue to disappear because the need for basic food and shelter leaves few other options. More research is needed to find out which yet unresearched plant, animal or insect might hold cures to todays ills. We simply cannot afford to let those rainforests disappear. Each one of us has a responsibility to help fight poverty, if only because it's in our own best self interest.

What's the solution?
Obviously, this is a complex problem and no one organization holds the "correct" answer. There are charitable organizations doing wonderful work around the world. In Madagascar, we saw first hand the work that the World Wildlife Fund was doing to provide the information and means for locals to get more out of their farms by using new agricultural techniques and provided stoves that didn't require charcoal. We also saw and respected the work they were doing to set up nature reserves and provide the training that would enable locals to work in them.

Please take a moment to consider whether your circumstances, even in these hard economic times, allow you to donate to an organization that fights poverty. When you compare yourself to people surviving on beans, I'm sure they do. A donation to the World Wildlife Fund, a local food bank, or the organization of your choice goes further than you realize.

If you have published a travel related Blog Action Day post, let me know in comments.
Related Posts A Refreshing Change, Beautiful Pictures of Myanmar