How to Negotiate Airline Change Fees

Nobody wants to travel with a sick child (and even fewer people want to be stuck on a plane with one) but airline change fees are so punishing that parents sometimes feel like they have no choice. I want to share a recent experience and how we were able to work with the airline to change our ticket at the last minute. 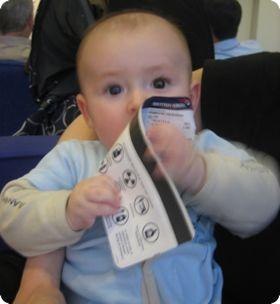 When we returned from Disneyland a few weeks ago, E suddenly started vomiting just as we were leaving for the airport. Small kids (especially if they're related to me) throw up a lot. Sometimes it is an isolated incident and you never find out what caused it. Other times it is a sign that they are very sick, and in rare cases a young child can even become so ill that that require hospitalization (usually for dehydration). Unless you know that a stomach virus is making its way through your play-group, it can be hard to predict what will happen.

With our bags already loaded in the car, we decided to proceed to the airport, but when E continued to be sick on the way, I called the airline to find out what our options were. With a few hours rest away from the motion of the car or an airplane, he might recover. If not, we'd be best able to give him the care he needed in a hotel room or at his grandmother's house.

The airline was unsympathetic, the flights for the remainder of the day were almost full, meaning that if we decided not to take our scheduled flight we would have little chance of getting on a later flight. Securing seats on a later flight (either that day or on a future date) would incur a $125 change fee per person ($500 for the entire family) plus any fare change.

Obviously we felt stuck. $500 was a huge additional expense... should we split up the family? Take our chances on standby and risk sitting in the airport for hours with a sick child? Drag poor E through the airport and hope he started to feel better once he was out of the car?

When we arrived at the airport, we parked the car and my husband ran in to talk to a supervisor in person. After lots of negotiating, the supervisor grudgingly booked us on an afternoon flight with no change fee. That gave us enough time to confirm that E was, in fact, fine before proceeding on our journey.

Here's how he made it happen:

When all else fails, remember that you do have other options. . . one way fares from LA to Seattle, even at the last minute, are often lower than the change fees + fare change that the airline quoted us. Or, if you are particularly worried about the risk of changing your flights when a child gets sick, you might consider purchasing trip insurance when you fly.

Have You Convinced an Airline to Waive Their Fees Recently? Share what worked for you in comments.