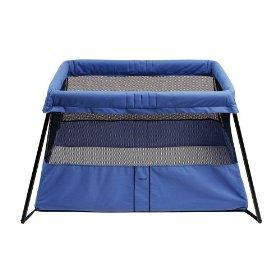 This lightweight travel crib is easy to set up and seems like a comfortable choice for a baby or toddler who needs to sleep in a familiar bed each night. You can read my full review of the BABYBJÖRN Travel Crib here.

This Giveaway is now closed. To learn about new giveaways as they become available, please

away to one lucky reader. If you would like a chance to win, leave a comment before 11:59PM PST on Tuesday March 17 2009 and tell me about a favorite kid friendly hotel, attraction, or restaurant in a city near you or someplace you have traveled. Please include your email address in the comment form (your email isn't shared with anyone, and I will not send you email unless you win).

How to Get More Chances to Win
There are several ways you can get additional entries in this contest. Each takes only a few minutes!

Winners
We will choose a winner randomly and announce the results here on Wednesday March 18 2009. Many thanks to BABYBJÖRN for generously sponsoring this giveaway.

Share This Contest
If you have family or friends who you know will love this giveaway, just click the "share this" link at the bottom of this (or any) post to email it to a friend.

Rules
Please, only one comment per person per giveaway post (except as outlined above where the comment is related to an extra entry). Duplicate comments and Anonymous comments will be discarded. Please make sure that the email address in your comment form is valid (email addresses are never public). Winners must claim their prize within three business days after the date of notification of such prize. A Sweepstakes winner's failure to respond to the prize notification within the specified three business days will be considered such Sweepstakes winner's forfeiture of the prize and an alternate winner may be selected from the pool of eligible entries. If an entrant is found to be ineligible, an alternate winner may also be selected from the pool of eligible entries. To enter, you must be a U.S. resident, age 18 or older. Employees, partners and vendors of DeliciousBaby and their immediate family members are not eligible to enter. We will disqualify any entries that we believe are generated by scripts and other automated technology. When applicable, the winner may be required to execute and return within five business days an Affidavit of Eligibility and a Liability and Publicity Release to be eligible for the prize or an alternate winner will be selected. All prizes will be awarded. No substitutions including for cash are permitted, except that DeliciousBaby reserves the right to substitute a prize of equal or greater monetary value for any prize. Winners shall be responsible and liable for all federal, state and local taxes on the value of their prize.