During Labor Day weekend I was invited to a local media brunch with Alan Mulally, CEO of Ford Motors as a part of the effort to launch the new Ford Taurus. If you want to see me looking serious and taking notes, click here 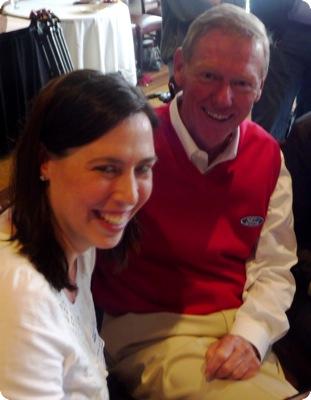 I sat alongside journalists who have been covering autos for years and instead of asking about unions, fuel efficiency, company finances or any of a number of other worthy questions, I asked about what seemed most relevant to my life and to my readers... What is Ford doing to make our children safer when they travel in Ford vehicles.

According to the CDC motor vehicle accidents are the leading cause of death among children in the United States, so even small improvements can make a big difference in the number of fatalities each year.

Mr Mulally's answer focused on what Ford is doing to help drivers avoid accidents in the first place. Optional features on the new Ford Taurus alert the driver to an approaching vehicle in the car's blind spot, and to difficult-to-see cross traffic when the Taurus is backing up. These innovative features seem like they could help avoid some of the common causes of accidents. 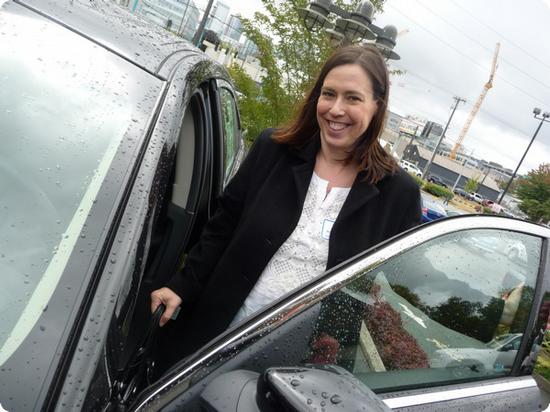 Getting ready to test drive the new Ford Taurus

It is also important that each child be seated in a correctly installed child safety seat. Child safety seats have proven so effective that they are mandatory in all 50 states. In Washington State, where I live, child restraints are required until a child reaches age 8. I will be installing, uninstalling, and re-installing car seats for a total of almost 13 years! Each time one child outgrows their seat, I revisit this issue, sometimes re-arranging and re-installing all of their seats.

It sounds easy enough, but according to the National Highway Traffic Safety Administration, three out of four car seats are used incorrectly. Properly installing a car seat can require reading both the car seat installation instructions and the car's owner's manual as well as a number of "tricks of the trade." To make things even more complicated, not every seat fits in every car - meaning that a parent might spend hours trying to properly install a seat only to return it, purchase a new seat, and try again.

I followed up with Kelly Adams-Campos in Ford's Automotive Safety Office (Ms. Adams-Campos is also a registered car seat tech in her off hours) to understand what Ford is doing to make car seat installation easier and more reliable for their customers.

According to Ms Adams-Campos, the company has simplified installation by making it possible to use LATCH in the middle seat position with some car seats. However, the company does not test or recommend specific car seat models.

When I asked about the government's new program, I was told that the company does not have plans to test specific seats or make recommendations, because, according to Ford, it is not a good use of Ford's time and resources. Instead, the company refers customers to the website CarSeatData.org where parents share information about what worked for them.

As a car-owner and a parent, I'd love to see auto companies work together with car-seat manufacturers to make it easier to install seats properly. A list of seats that work well (and seats that don't) seems like a great first step. Do you think car manufacturers should do more or do you think that researching, choosing and installing the correct car seat is easy enough already? What would you like to see auto companies do to help make children safer? Share your thoughts in comments, and I will make pass them on to Ford.