Last week I wrote about our family visit to the Bishop Museum's Hawaiian Hall. At the end of the story, the kids were stretching their legs outside in the hot Hawaiian air. Once they got their jiggles out, we headed into to the Science Adventure Center, one of the museum's other exhibition halls, and perhaps the most kid friendly permanent exhibit. 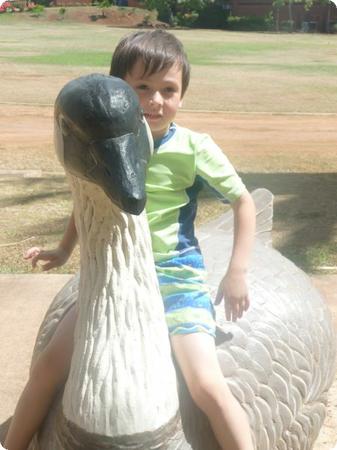 My family rarely meets a science museum it doesn't like, and we're excited to check out a new science museum in almost every city we visit. Still, most science museums seem to exist in a vacuum, teaching kids about physics, chemistry, and the other sciences using exhibits that could be done in any city in the world. The Bishop museum has taken a different approach, focusing on science as it relates to Hawaii's environment, including volcanology, oceanography and biodiversity - there's even a fun exhibit that helps kids understand the difference between native species and introduced ones (and why we would care). It's that focus that makes it worthwhile to take time out from your Hawaiian vacation to visit the Bishop Museum's Science Adventure Center even if you're not a science nut. 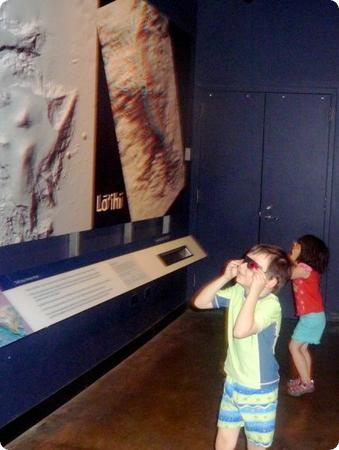 For my kids the main attraction was the volcano exhibits. They've been interested in Volcanos ever since we were stranded in London for 10 days when the ash cloud emitted by Eyjafjallajökull's eruptions closed Heathrow airport.

We started our visit by descending through a lava tube into the core of a man-made volcano. As we walked deeper into the volcano, we hear chanting and snippets of Hawaiian stories. Magical looking creatures adorn the walls, and because the tube is illuminated with black light, we begin to glow. It's unusual, but not scary, and the kids have been completely won over. They can't wait to see what's at the core of the volcano. 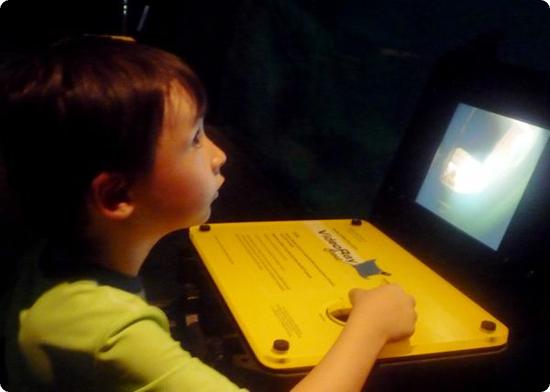 If you arrive at the right time, you can catch a "lava show" where real lava is melted at at about 2700 degrees and poured out to make a lava flow. We missed it, but you can get the daily schedule at the museum entrance. Even if you miss the show, there are some other neat exhibits in the core, including remote-operated submarines visitors can steer around a deep-tank mock-up of underwater volcano Lo'ihi, and a melted wax demonstration of a volcanic lava flow, where kids turn a crank to make lava flow out the top of of a volcano. Eventually, I dragged my kids away from these two exhibits, and we rode an elevator up to the volcano crater. 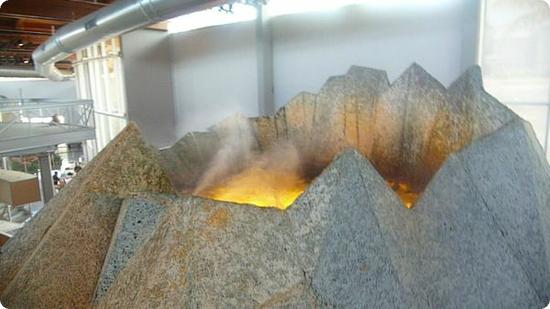 Poor Darya was a little worried about that crater - after all, if an eruption in Iceland could ground our flight out of London, what would happen if you were right next to a live volcano?! But soon enough she realized that it was all in good fun, and we headed downstairs to explore the rest of the science center. 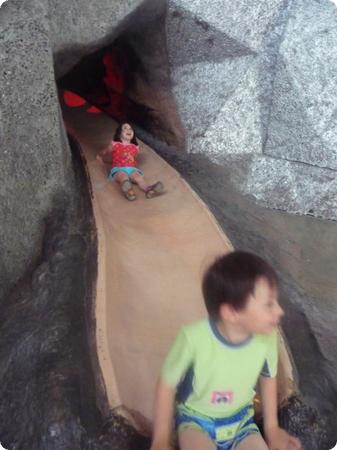 A volcanic slide! Of course ;)

There's tons more to do here, but eventually the kids got hungry, and we headed to the museum's cafe for a bite to eat and then to the bookstore for a cuddle and and the opportunity to leaf through the excellent collection of Hawaiian children's stories. 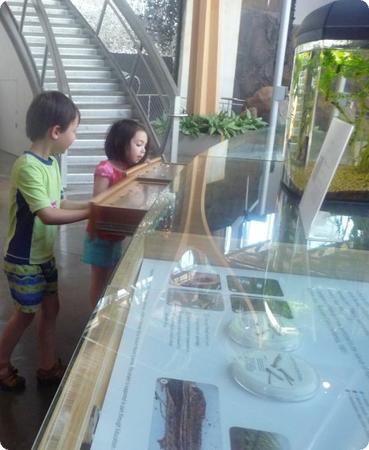 The kids loved these drawers, each of which contains bones, shells, or other artifacts from local animals
Related Links
City Guide: Honolulu, Oahu with Kids