I received both complimentary tickets to LEGOLAND and a complimentary room and brunch at the Four Seasons Aviara in Carlsbad California. I received no other compensation besides these items, and the neither company expressed any requirement that I express a particular point of view. I always strive to present a balanced view of any product or service that I review and I do not accept pay-per-post or pay-per-positive reviews. On the rare occasion that I do accept a free service from a sponsor I will always let you know.

Both kids woke up bubbly and happy this morning, despite the late bedtime last night. I hustled them out of the room, hoping to let my husband sleep in a little, and walked them (still in PJs) to the Four Season's breakfast buffet. 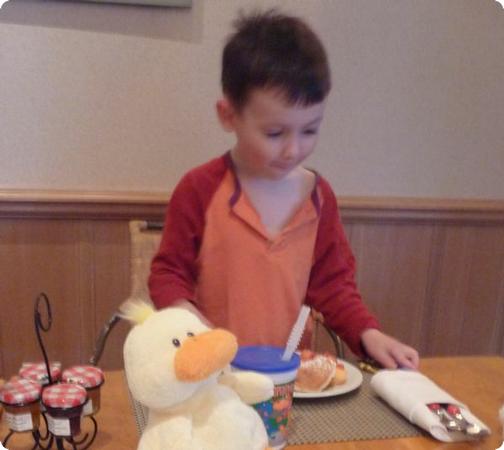 E enjoying the buffet at the Four Seasons Hotel in Carlsbad

Surprisingly, this is the first time I've ever taken the kids to a buffet alone, and I hadn't quite considered the logistics of getting three plates and two kids back to our table without grinding strawberries and yogurt into the dining room carpet. It's funny how each time I think I have traveling with kids "mastered" some new (innocent seeming) challenge rears its head. As I juggled the loaded plates, we somehow managed to return to the table without any significant incidents. E helped out by carrying his own plate, forgetting to use two hands a few times, so that I ended up with a handful of (thankfully untrampled) berries in my hand by the time we reached our table. I'm hardly as elegant as the ladies who graced the ballroom of the Four Seasons the night before in their Manalos, but possibly just as happy.

The effort was worthwhile. Breakfast is my favorite meal of the day, and I love a good buffet. Having chosen their own food, (and perhaps because of the unlimited berries - a rare winter treat in our own home) the kids seemed more satisfied than they usually are. When they finished eating they were shockingly content to sit and draw with crayons as my husband joined us for his own meal.

The weather forecast predicted rain for today, a rarity at any time of year in Carlsbad. As we left the hotel the clouds looked threatening, but as we pulled into the LEGOLAND parking lot, they unleashed the kind of downpour that we rarely see in Seattle. Most of the LEGOLAND park is in the open air, so we headed into LEGOLAND's new SEA-LIFE aquarium exhibit instead.

Unfortunately, everyone else at the park seemed to have the same idea, and with no covered waiting area it seemed like everyone was being allowed in all at once. The small spaces, meant for up-close viewing of the animals were overwhelmed and it was tough to keep track of the kids. We worked our way through the maze-like exhibit quickly, pausing briefly in less crowded spots for the kids to inspect the fish up close or even touch an anemone in one of the open pools .

Luckily the rain let up by the time we exited, and we decided to brave the park itself. Gradually the clouds receded, and the air warmed up, yet the park remained mercifully clear of the spring-break throngs who I assume were scared away by the morning rain. 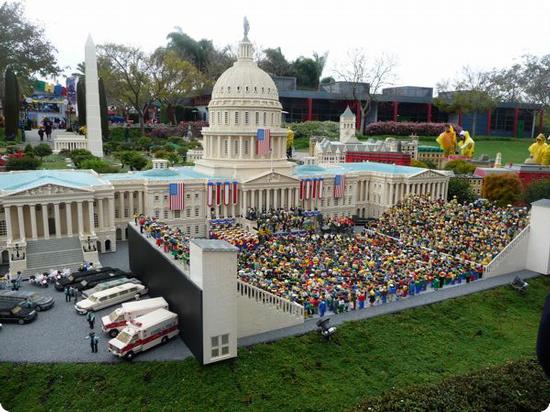 Our first stop was MINILAND, where replicas of cities like New York, New Orleans and Washington DC are constructed entirely out of LEGO. The kids were fascinated by the moving LEGO models, and E kept asking us "how do they do that." This was one "museum exhibit" where we had to work to keep the kids moving instead of working to keep them engaged.

As we worked our way through the park, and as the weather cleared, our spirits rose. Most of the rides were gentle enough for D and E, making it easy to work our way through the park without accidentally ending up on a scary ride. Better yet, with the park nearly empty, we waltzed onto each ride without waiting. The kids were thrilled to swoosh around in toddler sized airplanes and surge up to the air in helicopters. 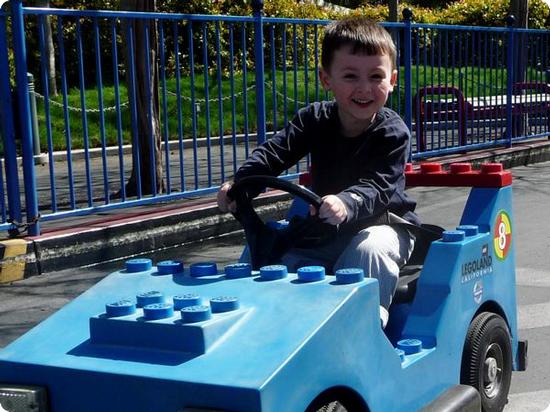 The highlight for E was the "Volvo Junior Driving School." Unlike Disneyland's Autopia, where cars sized to fit teens or adults drive around a track on rails, the Driving School cars were sized to fit a single preschooler. E has been talking for months about the car he wants to buy when he is old enough - a white car that he will paint brown and write his name on. He complains almost daily about the long wait until he is sixteen. You can imagine that E was beyond excited as he climbed into a small, blue car all by himself, and found that he could reach the gas pedal and steering wheel. He cruised around the track with a bump here and a bonk there and a priceless grin on his face. Leaving for the day, he talked incessantly about the car, almost as if he couldn't really believe what had happened and he needed us to reconfirm that it wasn't just a delicious dream.

As we drove back to my in-laws house in Orange County, the kids chattered happily in the car, scattered LEGO bricks across the floor and seats, and finally drifted off to sleep. I kept listening for snippets of sleep-talk, but since there wasn't any, I can only imagine what memories filled their heads. With the park a mere hour-and-a-half from my in-laws house, I imagine we'll be back on a future visit.

Carlsbad and LegoLand with Kids