New Mexico With Kids: The Road to Santa Fe 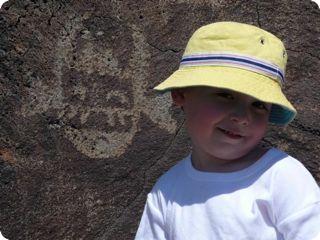 We're moving at a much faster pace on this trip (in terms of the amount of time we're spending in each place) than we ever dared before. It's already time for us to pack our bags and head from Albuquerque to Santa Fe. E wasn't quite ready for the change this morning, and told us he was sad, that he wanted to go home, and that he wanted to stay in Albuquerque. This is the first time that he's ever expressed anything other than enthusiasm for heading to a new place, and it bummed us out a bit. We figure he was just starting to get comfortable with the hotel, and the area, and he doesn't want the fun to end. Partly, it's developmental too, he's been having a harder time leaving friends houses and other activities when we're back home. Still, once we finally got packed, he was enthusiastic and ready to explore.

The great thing about packing light isn't what you'd think (no checked bag fees, less to lug through the airport), it's the fact that re-packing gets so much easier. Having just a few things to gather makes it easy to remember what to look for. I also use a separate Eagle Creek Packing Cube for each kid's clothing (and another one for toys) so that everything has a place. That keeps our things from getting scattered all over the room. Believe me when I say that packing with a 1 year old and 3 year old underfoot can get chaotic, so I'll do anything I can to make sure it goes quickly.

Our first stop, on the way out of town, was the Petroglyph National Monument There are over 20,000 carved images in the rocks at Petroglyph National Monument, and a hike on one of the many trails also provides an opportunity to see how diverse and interesting the dry landscape is up close. By the time we arrived, it was already very hot, so we opted for a short hike, close to the road. For former hikers, it felt like a bit of a cop-out, but it turned out to be just about right for all of us. The terrain was just rocky enough that little D needed some help (and some close watching), but she loved the challenge! E was fascinated by the petroglyphs. He loved everything about searching for the pictures in the rocks, and he puzzled over each one, delighted when he deciphered what it was. At three, you can guess that he had lots of "why" questions... about why the pictures where there, why the people made them, why they drew a bird, or people, or a circle.

The questions continued as we drove away, and it was as much fun for us to try to figure out how to answer them as it was for E to ask. As D drifted off for her nap, E leafed through a book of Petroglyphs that we had picked up at the Visitor Center, and the chatter continued for longer than I would have imagined until he switched gears to singing songs for us (a little noisy, but it's nice not to have to lead the charge on road-trip song singing ;)

Just outside of Santa Fe, D started to wake up, and we decided to make a detour to El Rancho de las Golondrinas (The ranch of the swallows). From the 17th to the 19th century, the ranch was the last stop on the El Camino Real before arriving in Santa Fe. What visitors see today is a reconstruction of the small agricultural village, complete with staff in period costume, billed as the "Williamsburg of the Southwest." That's a fair way to describe the ranch, though what we found was a lot less "bustling" than the Williamsburg I remember from my own childhood. For me, the quiet added to the charm as we wandered in and out of buildings set up as weaving rooms, shops and homes.

The kids were fascinated with just about everything, especially the beds and ovens, but the hi-light turned out to be some tee-pees we spotted off on a side lot. Frontier Days, one of the many weekend events scheduled at the ranch during the summer, was scheduled to begin the next day, and "Mountain Men" (as the docent described them) had come to camp using traditional tents and teepees. During the festival, each would demonstrate some aspect of how people lived, and the skills they had in the past. With the sun at its hottest, most were sitting in the shade, giving us the perfect opportunity to talk with a few people.

One man showed us how animals used to be trapped, and how to build a shelter out of sticks and leaves. He explained that his ancestor had been the first trapper in the area, and that he came to "Frontier Days" each year to teach kids and adults about this important part of his family history, and local history. We sat in the shade and talked with two older men, also "Frontier Days" regulars. Watching our small kids investigate the area and play, they shared their memories of bringing their own kids to the campground each year and their thoughts about the important lessons their kids had learned about nature, and about the responsibility that comes with living in a communal space. It was easy to see these men, dressed in period costume, and sitting outside their tent as some sort of caricatures, so I was glad when one of the men, a school teacher by trade, shared a story of his own trip to Seattle and a cruise to Alaska with us.

The kids played and half-listened, soaking up enough that E asked me later "why did that man tell me 'always listen to your mamma'" This is one of the things that I love about traveling, getting out of my comfort zone so that I can hear different perspectives and gain some insight into world views that are different from my own. I might not have agreed that raising kids in the city (as I do) is a bad idea, but our talk was a good reminder about how important it is for me to get my kids out into nature more often. My kids are to little to understand the details, but I hope that as they grow up, they'll start to understand the value of listening to different ideas, and even more importantly, of being willing to talk with people who don't look, dress, or live exactly the way we do.

After a longer-than-expected detour, we arrived at Santa Fe's plaza too late in the day to visit any of the museums or other tourist attractions. Instead, we wandered past upscale jewelry shops and art galleries to the Saint Francis Cathedral Basilica. The Cathedral itself was closed, but there was a large tile labyrinth set into the courtyard, perfect for E to follow from start to finish, and back again. He's been obsessed with the book Museum Trip

lately, in which a young boy visiting a museum shrinks down and physically runs through one maze after another in the museum's display. We can only imagine what was going on in E's head as he got his own chance to solve a life-sized maze, but it was clear that he was thrilled, and we practically had to drag him away at dinner time.