New Mexico With Kids: A Visit to Taos Pueblo 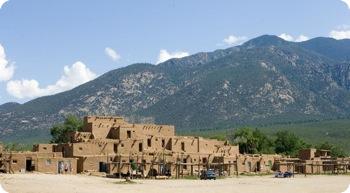 When we planned this trip, we thought it was about scenery, artwork, and a little bit of history. Now that we're here, our kids have developed their own theme. They are fascinated with different ways of living. Through a reconstructed agricultural village, the "Mountain Man" Festival and an overview of different Indian Pueblos they've been most interested in homes and in everyday items they could relate to. So today's outing, a trip to Taos Pueblo turned out to be a hilight for all of us.

Taos Pueblo, just outside the city of Taos is an ancient Native American town that has been lived in continuously for 1000 years. It also a UNESCO world heritage site, and everything is maintained according to the community's traditions. Houses have no electricity or plumbing, so today most people live in modern houses outside the walls, occupying their ancestral homes for ceremonies only. The first thing the kids noticed, though, was the dogs roaming free and lounging in the sun. D wandered a bit, wanting to greet each one personally, but we gradually steered both kids towards the Pueblo entrance.

Taos Pueblo is made entirely of Adobe, and with no modern signs or non-adobe structures in site, it's easy to feel like you have entered a very different time and place. There's a noticible difference in teperature along the river bed, and one even a short visit you start to understand first-hand why civilization sprung up along waterways. Each of the two huge pueblo buildings is made up of separate homes, built side-by-side and sharing walls (but not entrances). In spots, the buildings are up to five stories tall, and some are entered only by climbing ladders on the outsides of the buildings.

Though there is a suggested walking tour, we wandered at our whim through the Pueblo. Many residents have set up shop in their homes, selling traditional arts or food. Our first stop was a drum shop, and after a warm greeting from the owner, our kids happily explored the sounds made by each of the different sized drums. Each drum was handmade out of a hollowed out cottonwood tree trunk and covered in cured elk hide. As we continued on our walk, we found other homes selling pottery, clay scuptures, and other traditional artworks. D was fascinated by the a clay workshop in one home, and the idea that the owner had made the scuptures out of "playdough" and then painted them. E loved the way the houses were "stacked" and wandered endlessly with his dad, searching for ladders.

A high-point for the kids, though were two riverside snack stops. At the first stop we bought bread that had been baked in a traditional wood-fired adobe oven. The kids have seen the ovens, called hornos, everywhere, and they were excited to eat something baked in one. As they ate, a few friendly dogs stopped by to pick up the crumbs. For D, that only made the scene more magical.

We sat in the shade, by the riverside and talked for a while with the baker. She has lived and worked in the city of Taos for years, but recently moved back to her traditional family home to save expenses and return to her roots. Life is both simpler, and more difficult. Like all the homes in the Pueblo, her home has no running water, and she rises early each morning to draw water from the river and bake bread to sell. She bathes in the river, and makes a trip into town on laundry day. Having grown up in this home, she told us that she now understands better the work her mom did every day with no electric appliances or running water to ease her workload. She's winnowed down her own possesesions too, finding that without the electricity she doesn't need so many gadgets, and knicknacks. For her, though, the ability to live, work and eat without worrying about electric bills, rent and taxes makes the hardship worthwhile.

A bit later, we bought some fry bread and took it to another grassy riverside spot. For me, the warm honey-drenched fried bread alone would be a reason to visit the Pueblo. The kids loved sitting in the cool grass to eat instead a restaraunt or hard park bench. E was delighted when a local 4 year old came up to play and "fish" with a stick and string along the river's edge. Like many city parents, we keep a fairly close watch on our kids when we are out of the house, and it was refreshing to watch the boy play freely in the open space. In view of his mom, but out of arms reach, he could search for snakes and imagine the fish he would catch to his heart's content. This was a great reminder for me that I need to find more spaces where my kids can explore without me getting in their way.

I need a little space for myself too. We have visited a record number of sites on this trip. For the first time since E was born, our ability to explore is as limited by our own energy as by the kids' attentions span (I'll add that to my list of "good problems to have"). The limited time we allowed for this trip also meant that we moved faster and visited more cities in less time than we usually do. As we settled into our cozy beds on our first night in Taos, I realized that the time has come to slow down a bit and enjoy the scenery and the company of my family instead of rushing from site to site. Today, we returned to the hotel for naptime instead of exploring Taos with D asleep in the stroller.

Touring the hotel grounds with E while D napped in the room wasn't exactly an enlightening cultural experience, but the rare one-on-one time was just what the doctor ordered for both of us. We picked up an apple from the gym and then cuddled on a lounge chair by the pool while E snacked. We found the game room, and I realized that E had never seen a pool table before. Too short to shoot on his own, he was thrilled to watch me hit the balls with a cueue and made a great pool partner, rolling each ball into a pocket after I hit it and laughing hysterically any time I hit the cueue ball into a pocket. Finally, after we'd exhausted the waterfalls, the koi ponds, the pool and the game room, we decided to get a snack at the "fancy restaraunt." I got a few looks as I walked in, but I knew that after so much activity and attention, E would be on his very best behavior, and he was. He was thrilled to get a big glass of undiluted Apple Juice (a rare treat at home) and cuddle on my lap until my husband called to say that D was awake.

The rest of the trip passed ueventfully, we explored Taos with more of a mind towards relaxation than discovery, we returned to Twirl's playground a few more times, and my husband had time to shoot some photos. All in all we had a wonderful trip. Sure, there were moments when we wished we had the freedom to explore Santa Fe's art galleries unencumbered or enjoy a nice dinner together, but it was amazing to see E's developing sense of exploration take hold and to watch both kids discover new places, people and things to do. Even after factoring in every moment of insane toddler behavior, I wouldn't trade this trip for anything, and I certainly wouldn't trade it for staying home.