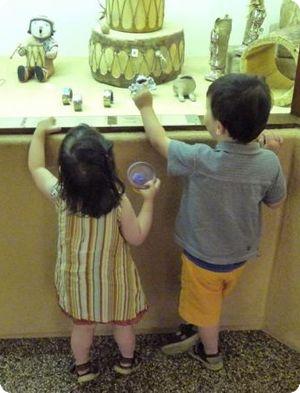 It has been a while since our last full-fledged family vacation, and we must all have been full of the same sens of adventure and energy, because today was the busiest travel day we have ever had with the kids. We simply cannot believe how much we fit in, and how much the kids seemed to thrive on each new change of scenery. I know that their ability to get overwhelmed is still lurking under the surface, but it feels like they are starting to develop a real sense of adventure.

We started the day with a visit to the Indian Pueblo Cultural Center where each of the state's 19 pueblos has created a space showing their arts and crafts. Other exhibits trace the history of the Pueblo people or aim to show how people lived.

We usually start travel days with a museum to take advantage of the kids early-morning goodwill and patience. As the day wears on, we switch gears and add more kid-friendly activities. The last place any parent wants to be during the 4pm "witching hour" is a building filled with artifacts that can't be touched and where a child's natural spirit and energy need to be subdued.

In this case, though I shouldn't have worried about the kids. They were fascinated by the kid-height (but safely behind glass) displays of pottery, sculpture, and other daily use items. We're not sure whether she was more excited about all the stuff, or just wanting to show off her "tour guide" skills, but D ran around repeating "look at this, look at this." She wasn't exactly whispering, but she wasn't yelling either, and with the museum almost completely empty during the early morning hours we decided not to try to quell her enthusiasm for the museum. E pointed out a favorite item in each case, and revealed a fascination for intricately designed pottery that we would have never realized otherwise. We visited at the kids pace, which meant not reading many signs, but still enjoyed seeing the wide variety of crafts and everyday items, each beautiful with it's unique local design.

Midway through the circuit the kids spotted a small hands on area. E, always obsessed with tools, tried endlessly to master a stone drill and a small loom where kids could make their own fabric out of yarn. D tried the drill too, but finding it too difficult to balance, moved on to a drum and a small puzzle. Those few carefully selected and engaging activities provided just enough playtime to give us momentum to make it the rest of the way through the small museum. (The museum is in the midst of renovations and only a small portion was available during our visit. On weekends, the museum also hosts ceremonial dances in a large courtyard at the center of the building.)

We usually seek out local food at mealtime, and on this day we drove back to Old Town for lunch at Monica's El Portal. This casual restaurant was filled with locals, and since our West Coast kids find nothing more kid friendly than Mexican food, traditional New Mexican fare wasn't much of a stretch. E had seen blue corn in one of the displays at the museum and was excited to try a taco with a blue-corn shell. Our food was satisfying and delivered quickly, but the hi-light of the meal was the fresh fry-bread, served warm and drizzled with honey.

With D overdue for a nap, and E itching for a playground I pushed her in the stroller while E and my husband headed to the Explora Science Center. As in Portland, I didn't have high hopes for the Science Center, and as in Portland I was surprised and excited about how wrong I had been. Explora is among the best science museums I have been to. Not only were the exhibits well thought out, but the open, light filled space wonderful to be in. I particularly liked the way the museum was divided up into small areas, bringing the huge space down to kid-size and making it easy for a parent watching more than one child to keep everyone within view.

E was so fascinated by the first few exhibits that we quickly resigned ourselves to the idea that we wouldn't cover much ground. While D napped in the stroller, he played endlessly in a construction area where kids could build things out of PVC pipes. I was inspired by how many of the museum's exhibits were built using everyday materials. Some exhibits even had signs explaining how they could be re-created at home. My husband was inspired too, and claims he's going to re-introduce "science fridays" with our kids (where he does one science experiment with them each week). If you're reading this, honey, I hope you do...

Besides the pipes, there were areas for kids to learn about water, wind, and movement. A small gated toddler area seemed perfect for kids under two (though when she woke up D enjoyed the museum's "big kid" exhibits as much as her brother. There was also a crafts area where kids could make and take home artwork, and some special areas for ages 8 and up to do more advanced experiments. The music section did the best job I have ever seen of demonstrating how sound works.

We all needed an afternoon snack and a cold drink, and the casual Golden Crown Panaderia, a roadside shop just down the street from Explora, seemed like it would fit the bill. The kids were delighted to be given a fresh, sweet Biscochito when they walked in. If New Mexico had a "state cookie" the Biscochito would be it. The deliciate sugar-cookie like disc is spiced with anise and cinnamon, giving it a unique flavor. This is a good place to sample Bischochitos. Not only has Golden Crown been making them for 30 years, they've also been written up in Gourmet Magazine. We walked away with a bagful of the tasty treats for later. We also picked up some Empanadas, (filled pastries), and once again they were delightfully tasty and not overly sweet. I especially liked the pumpkin empanada, but there were also apple, cherry, apricot, lemon and more.

The kids seemed recharged, and ready for more activity, but we still wanted to beat the heat, so we headed to the Rattlesnake Museum in Old Town Albuquerque. This small museum houses the largest collection of different species of live Rattlesnakes anywhere in the world. When we visited, the owner was busily arranging for a few of the snakes to be used in a Japanese movie. D loves snakes (and animals of any kind) but since E had a snake nightmare just a few days before our trip, we weren't sure whether the visit would be scary or therapeutic for him, so we braced ourselves in case we needed to make a quick exit.

The museum started out easily enough, with some non-rattlers, frogs, and turtles. The kids loved the glass-enclosed displays and there were plenty of stepstools, enabling the kids to get right up close. When we proceeded into the rattlesnake room, the kids were fascinated with a large video about snakes (and E's refrain for the rest of the day was "why did one snake eat another snake." As we passed by each case, some of the snakes shook their rattles. D was endlessly fascinated by those who did, and once I realized what she was up to, I escorted her out of the room. I never thought I'd be placing the emotional life of a snake over my daugther's inquisitiveness! This is definitely one of those places where some parents will need to suppress their own phobias in order to help their kids learn a little about nature (and not pass those phobias on to a second generation), but the kids were so fascinated that we think it was worth the effort.

We thought our next stop would be Albuquerque's picturesque town square, which was being set up for an evening musical performance, but after a few minutes, the kids were getting feisty in the heat. We decided to make a quick getaway to the relative cool of the mountains. A short drive brought us to the base of the Sandia Peak Arial Tramway Sandia Peak's Tramway is the world's longest, and it carries you 2.7 miles over deep canyons and rocky terrain. While snakes aren't a big phobia for me, small spaces and heights are more of an issue, so this was my chance to "act like a grownup" and not let the kids see how uncomfortable I was. The kids were cooler already, but by now they were hungry. We grabbed a to-go box of chicken fingers and fries to take up in the tram, bought our tickets, and got on board. At the top, we sat on a bench and ate our simple dinner. The kids seemed delighted to be in cool air, and burt off some energy exploring. With everyone well fed, and getting sleepy, we didn't wait for the sun to set (though we're sure it would have been beautiful) before we headed back down the mountain and back to the hotel.

I'll be posting more about our trip this week, so please subscribe to our feed or check back!